15% OFF EVERYTHING | Use Code: JAN15
Buy 2 Phone Cases Get 20% OFF | Use Code: PHONE20
FREE UK, USA, Australia delivery on phone cases
Buy now, pay later with Klarna, Clearpay or Laybuy
0 You can personalise your phone case with your initials, your name or choose something random, the choice is yours, Just add it to the box above. Any special requests, please send an email to contact@livexmaintain.com

Items created and shipped within 24/48hours

Rest of the world

When your order is ready we will send you a dispatch notification via email.

PLEASE NOTE: Please ensure that all personalisation details entered are correct at the time of purchase as each item is uniquely personalised to your specification and so cannot be exchanged or refunded at a later date.

I have ordered twice from LiveXMaintain and the phone cases are stunning and really protect your phone. I initially received the wrong personalisation on the case I ordered, however after emailing i received a quick response within 24 hours and the correct phone case was sent out to me 2 days later. The only reason I’ve not given 5 stars is because I had also messaged the Facebook page the same message I had emailed and the response I got from them was appalling, so rude and sarcastic. I received an apology in the email, a full refund due to the way I was treated and was promised the customer service would need to be addressed with Facebook messenger. I highly recommend this company for phone cases as they are fab, the only advice I would give is to just email directly if any problems don’t message their Facebook page. 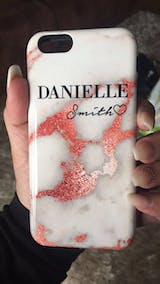 Thank you for my case it looks really good.

My case pattern etc is clear as day and the plastic fits to my phone so tightly that I can’t get it off again! Which is a bonus as I usually end up dropping my phone and the case falling off.

More from this collection